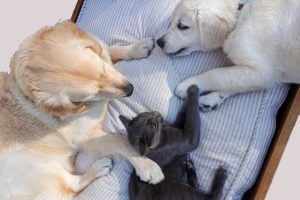 People who are new to Eckankar are sometimes surprised when they hear us refer to cats and dogs as Soul. In ECK, we do regard our pets as Soul. Why? Because they are.

Human vanity likes to say, “God made us and put a Soul in us,” as if you can possess Soul. But in Eckankar, we say, “We are Soul.” We are Soul, and through successive lifetimes, we take on a body for whatever experiences we need that time. Sometimes it’s a male body, sometimes a female body.

We don’t get into transmigration where we go back down the spiritual evolutionary scale to the animal or the mineral state. That’s lifetimes and lifetimes past. But it also doesn’t mean that this evolutionary scale goes straight up—or that it goes from plant to animal to human, where people can look down at their dog or cat and say, “Well, you are Soul, but I am a greater Soul because I am human. You still mess on the floor.”

Some animals—I would say a great number of animals—probably have a higher state of consciousness than their owners.

What Could People Learn from Pets?

People go to work. They become angry, they cheat if they can, and they indulge themselves in things that hurt both their physical body and other people who are dear to them. Then they come home, and the cat is always there, the dog is always there.

Treat your pets right, and they’ll always love. They don’t look at you with the eyes of judgment, saying, “You’ve got alcohol on your breath again.” Cats and dogs won’t do that to you. They’ll love you even if you’ve just had Limburger cheese. They’ll probably want some. “Just pet me, and let me sit in your lap,” they say. “Be kind and good to me.”

Cats and dogs are very nonjudgmental. In this way, they’re often superior to human beings.

We see somebody who is bumping the electric fence, a little bit out of the rhythm of life according to our idea of what the rhythm of life is, and we say, “This person is doing so-and-so. That person’s head is sticking up about one head taller than everybody else in this social group.” That is the social consciousness speaking. We get very self-righteous about our opinions. We think we are always walking around in shining clothes and other people are always walking around in dirty rags. We are special.

Well, dogs and cats don’t mind. Especially dogs. To dogs, their owners are always walking around in shining clothes, because they’re always giving out food.

—Excerpted from The Secret of Love, by Harold Klemp